Before there is a “we” there were individuals who happened to cross paths and made the choice to start a relationship. Relationships have phases that are developmental in nature and move toward building quality of intimacy. The “we” that lives with danger will experience a cycle of escalation of harm filled with power and control interactions in the relationship’s lifespan. 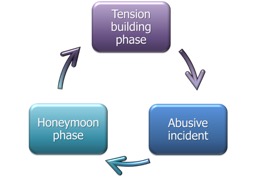 Honeymoon, a word to describe a holiday taken after someone is recently wed, is also used to describe the initial phase of romantic relationships where one sees a romantic partner through rose-tinted glasses. This stage in healthy relationships involves focusing on commonalities and ignoring flaws while also avoiding conflict.

When a healthy couple exits their honeymoon phase they can experience tension and conflict around the difference they see in each other. As a result, both friction and intimacy continue to build at the same time. The difference lies between the building of intimacy with tension versus tension building violence.

The tension-building phase of the violence cycle becomes rampant with desensitization. Desensitization creates the illusion that this is a special relationship – when the person who is doing the abuse is alternating between tension and positive reinforcements, such as affection and/or trauma bonding interactions. Patrick Carnes developed the term “trauma bonding” to describe “the misuse of fear, excitement, sexual feelings, and sexual physiology to entangle another person.” A trauma bond that increased in violence will influence a survivor to see the move toward violence as a need for their understanding in order to bring back the loving parts of the relationship.

Tension may show up as an increase in sensitivity, yelling, put downs, threatening language, crazy making behavior, property destruction such as punching walls or throwing things, accusing their partner of being unfaithful, isolating partner, and provoking arguments. Isolation increases when the abusive individual is seeking more power and control and needs the person they are controlling to have limited access to other people, resources, or their own sense of power. In response to the tension, a survivor during this phase may discover they are making continuous efforts to calm the person, tries to reason, satisfies the person with food or treats, agrees with the person, avoids, withdraws, becomes more submissive, and increases the nurturance. Tension builds to the point of an incident or episode of violence.

Just like steam comes pouring out when it reaches its pressure point, the release of built-up tension comes out in violence. Explosions may show up as verbal abuse, humiliation, slapping, choking, physical abuse, harassing, physically restraining, stalking, sexual violence, or property destruction. Responses from someone experiencing this phase of the abuse may include the need to protect themselves, leaving the relationship for a time, fighting back, attempting to reason, or calming the person hurting them.

The explosion serves the purpose of using threats and intimidation to establish more dominance. This level of violence is used to reinforce a power position where the other person in the relationship over time loses independence in his, her, or their resources, times, thoughts, feelings, and actions. As a result, a survivor’s reality becomes determined by the state of the abuser.

After the first explosive incident, the relationship re-enters honeymoon. The individual that is abusive will make apologies and promises that the explosion will not repeat itself, justify the behaviors, blame substances, blame others, declare love, give gifts of promises to attend church and support groups, threaten suicide, and ask for help. Remorse will show up as appearing ashamed and justifying behaviors. They will pursue with apologies and grand gestures. Desensitization between positive reinforcements and harmful behaviors return and the cycle begins another round.

The individual suffering relational violence may respond with setting up counseling for their significant other, dropping legal matters, returning to the relationship, experiencing hopefulness and happiness with believing things have changed, or making changes in their own life that are requested by the other person to help them change. These changes may increase the isolation and dependence. The return to the honeymoon phase is not a sign that the person has changed his, her, or their ways. It is not a sign that the relationship is heading in another direction. Honeymoons in relational violence are not about a person’s love. The honeymoon can seem like a break from the most violent or threatening interactions and it can lead the survivor to doubt the nature of the violence.

This cycle of violence and its phases will continue on repeat, repeat, and repeat. It is important to remember that the role of seeking power and control is a constant through all the phases. The phases and their behaviors are all part of the grooming and manipulative process to keep power and control over someone. The positive behaviors are not signs for change when the violent behaviors are still occurring, it is part of desensitization. Thus, an apology without a change in the behavior is manipulation. The cycle of relational violence becomes a matter of waiting for the next honeymoon to have a pause in violence.

Coping with Trauma in Children