My brother-in-law is a pretty smart guy.  Recently we were talking about food when he mentioned Kobe beef.  He said that farmers in Japan who raise Kobe beef, massage their cattle and feed them beer.  Now

honestly, that’s one the craziest things I’ve heard. Not wanting to be so blunt, I decided to read about Kobe beef and set him straight, but as usual. He was right.

What does Kobe beef have to do with politics?  It’s about listening, questioning, researching and being ready to admit we just might not be totally right.

Our political leaders often spout handpicked facts that substantiate their positions. They are not lies; they are half-truths at best.  This practice is certainly true in politics as well as in other areas of life.

It is important to hold passionate beliefs and to stand up for what we believe.  Too often we are standing up for what we want to believe rather what is true and accurate.  I believe we have a moral and ethical duty to be well informed.  Well informed doesn’t mean I form my opinions and declare them facts from postings on Facebook or Twitter or only one ideological point of view.  In our well-connected world, it takes a little time and only a little effort to verify the accuracy of statements.  Granted it is much easier to research Kobe beef than unemployment statistics or health care, but it’s still necessary.

Again, it is important to be principled.  However, it is easy to slip into self-righteousness, a self-imposed wall inhibiting personal insight and growth and common goals if we believe everything we read and then parrot it forward.  If our leaders can’t be bipartisan in their search for what is good and right, then we need to be examples to our leaders of a truthful, bipartisan, ground roots coalition.  It is our obligation to check out the accuracy of stories and statements before we re-tweet, re-post or just plain old fashioned repeat.  If we don’t, that seems to be what my Mom called lying.

It is our obligation to hold our politicians accountable to tell the whole truth by seeking the whole truth and not just a half-truth or a distorted opinion of a sliver of truth.  Seems to me, that’s also one of the commandments.

I am sorry but I can’t resist saying, 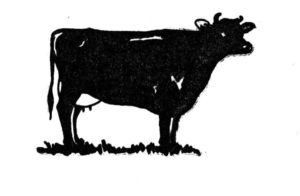